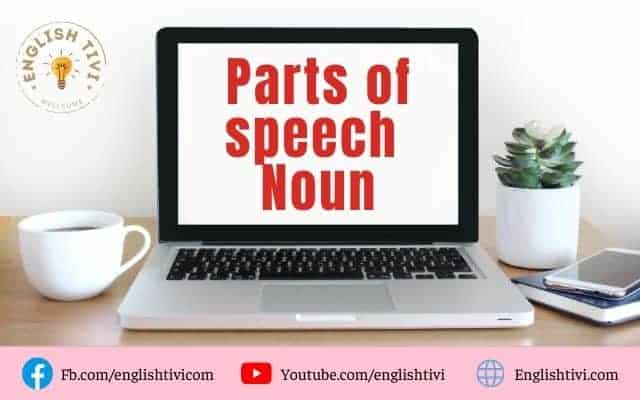 How many parts of speech are there in English? There are eight parts of speech in English: noun, adjective, adverb, pronoun, verb, preposition, conjunction, and interjection.
Here in this lesson, we will cover the Noun and then we will move ahead with others. Now learn What is a noun? What is its definition? What is its use of it? and what are its kinds or types etc?
Let’s learn with English tivi on the topic: Parts of Speech Noun Examples right now!

A noun is a person, an animal, a thing, a place, an action, an idea, feeling, a quality, or a state of being.

It names a class or a group of ground of a person, places, things, ideas, or feelings. Usually, it would help if you wrote it with a capital letter only it begins a sentence. It is the opposite of a proper noun.

It names a particular person, place, or thing. It is always capitalized. You always write it with a capital letter since the noun presents a specific person, place, or something. For example, the names of days of the week, months, historical documents, institutions, organizations, religions, holy texts, and adherents are proper nouns.

Gender is class of nouns that is usually masculine, feminine, common, or neuter, into which nouns and pronouns are placed in some languages ​​, distinguisher by a particular inflection.

+ We add ” s ” to singular nouns in order to form plural nouns.

+ Irregular nouns from their plural by a vowel change or not to change.

+ My father is a commander-in-chief.

+ Marlene and Mary are my good daughters-in-law.

It is made up of two or more words acting as a singular noun. The words may be written as one word, written as separate words, or hyphenated words.

There are four ways of writing it.

It is a count noun that denotes a group of individuals. Many words indicate a number of people or animals are singular. Also, a collective noun is a noun naming a group of things, animals, or persons. The following nouns are usually singular. In some cases, they are plural if the sentence indicates that individual numbers are acting separately.

The following nouns are used to indicate groups of certain animals. It’s not necessary to learn about it. However, they mean the same as a group of thus are considered singular.

Collective nouns indicating time, money, and measurements used as a whole are singular.

+ There is/ There was/ There has + singular subject … ( or uncountable noun )

+ There are/ There were/ There have + plural subject …

It is a group of words that ends with a noun. Nouns can contain determiners ( a, an, the, etc. ), adjectives, adverbs, and nouns. It cannot begin with a preposition. Remember that both subjects and compliments are generally it.

+ Countable Nouns: It that we can count. It can be singular or plural.

+ Uncountable Nouns: It is one of the nouns that we can’t count. It can be only singular.

+ Some words or phrase used with countable and uncountable nouns.

Subjects are classified into three kinds as Simple, Complete, and Compound Subjects. In addition, we need to think about subject complement too.

The simple subjects don’t include any modified words ( modifiers ).

Complete subjects include some modified words into the simple subjects.

Two or more subjects that have the same verb form are called compound subjects. Compound Subjects.

The subject complement is a word of it that is the same as the subjects.

A. Objects of Verb or Direct Objects

An object of the verb is a noun or pronoun that is used after the transitive verb.

Two or more objects are used after the transitive verb. It is called the compound object.

Object of the preposition is an object that is used after each preposition.

An object complement is a word of nouns that complete the meaning of the direct object ( object of the verb ) in each statement.

The retained object is a noun or a pronoun that we use in the passive form after the past participle .

Above is a summary of Parts of speech: Noun. Hopefully, we have contributed to help you learn English in general, become more accessible and more interesting. Good luck with your studies and soon!