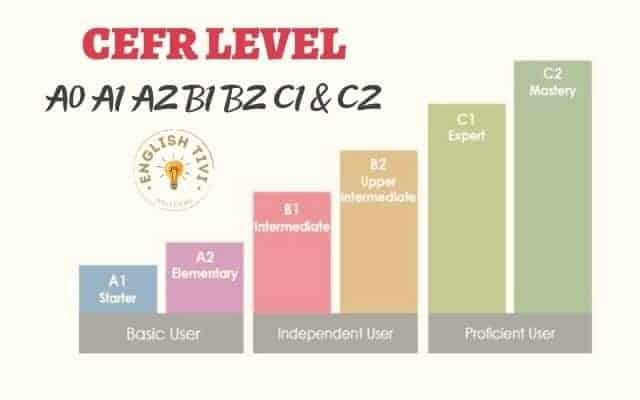 What are the 7 English levels of CEFR?

CEFR is an international standard for describing language ability. It describes language ability on a seven-point scale, from A0 for beginners, up to C2 for those who have mastered a language.

+ Independent language user: B1, B2

The Common European Framework of Reference for Languages ​​(CEFR) is an internationally recognized standard for describing language proficiency. CEFR is widely accepted throughout Europe and is growing in popularity worldwide.

CEFR is a way to describe your ability to speak and understand a foreign language. Several frames of reference have a similar purpose, including the American Council for the Teaching of Foreign Languages ​​(ACTFL) Code of Proficiency, the Canadian Language Standards (CLB), and the Organizations Roundtable rating scale. Language (ILR). CEFR is not tied to any particular language test.

CEFR is a European rating scale and is specifically designed to apply to all European languages, so it can be used to describe your English, German or Estonian skills.

The Council of Europe developed CEFR in the 1990s in a more significant effort to promote cooperation among language teachers in all European countries. The Council of Europe also wants more precise guidance for employers and educational institutions wishing to assess a candidate’s language proficiency. Therefore, the frame of reference is designed for use in both teaching and assessment.

Rather than being tied to a specific test, the CEFR is a set of ability statements that list functions you should be able to perform using a foreign language at any level of proficiency. . For example, one of the B1 ability claims is “Can write simple connected content on topics that are familiar or about personal interests.” A teacher of any foreign language can use these affirmations of ability to evaluate you and design lessons to address gaps in your knowledge.

CEFR is widely used in language teaching in Europe, both in public education and private language schools. In many countries, it has replaced the hierarchies previously used in foreign language teaching. Most education ministries in Europe have a clear CEFR-based goal for all students to graduate from high schools, such as reaching B2 in the first foreign language, B1 in the second. In addition, many European adults use the scores of a standardized test such as the TOEIC to describe their English proficiency for job seekers.

The adoption of CEFR is much less common outside of Europe. However, several countries in Asia and Latin America have adopted it in their education systems.

4. Why is CEFR important?

In Europe, CEFR is increasingly becoming the standard way to describe your proficiency in a foreign language, especially in an academic setting. If you have studied in one language like most Europeans, the CEFR is a convenient, standardized way to show two or more languages ​​on your CV. In schools, CEFR is the standard framework of reference throughout Europe and can be used without restrictions.

However, in an enterprise environment, CEFR is not as widely accepted. Suppose you decide to use CEFR in your CV for professional purposes. In that case, it’s still a good idea to include a description of your qualifications, a standardized test score, and examples of instances where you’ve used the skill. Your language (study abroad or work abroad,…).

The best way to find out your CEFR level is to take a well-designed standardized test.

Depending on the language, you will need to take a different test. Check with the official European guide for that language, such as the Francophone Union for French, the Cervantes Institute for Spanish, or the Goethe-Institut for German. It is uncommon to use CEFR levels to describe your level in non-European languages.

An average native speaker has at least C1. C2 could be but C2 is more for scientific reasons or literature.

B2 is still mostly textbook language – you have some access to native expressions but you still deal with pre-set phrases and usually need to be explained new things. C1 moves towards much more instinctive language – where you just know that something is right and you have a feel for the language.

Speak with people, read newspapers, magazines and books, watch movies, listen to radio, write articles in forums, write stories and post them for example here for correction. Write a diary in your target language.

B2 level exams You can also get an a B2 certificate if you do well enough in the PTE Academic, a multi-level exam, while B2 level candidates should get a band score of 5-6.

The “C” Levels: Proficient User. At the C1 CEFR level, a language learner can: Understand a wide range of longer and more demanding texts or conversations. … Effectively use the language for social, academic, or professional situations. Create well-structured and detailed texts on complex topics.

Above is all helpful information about CEFR level. I wish you all good study!

In addition, you can refer such as English skills, grammar, … are constantly update on Englishtivi.com.